Cyclin-dependent kinase 5 (Cdk5) is as an essential kinase in sensory pathways. Cdk5 is implicated in almost every aspect of neuronal development and neural functions. It is implicated in cognitive functions such as learning and memory formation.

The Cdk5 signaling pathway has been linked to neurodegenerative diseases (Parkinson's and Alzheimer's disease), and dysregulated Cdk5 activity is associated with neuronal death.

In the study, Distinct Cerebrospinal Fluid Proteomes Differentiate Post-Treatment Lyme Disease from Chronic Fatigue Syndrome, the Cdk5 signaling pathway, was found to be significantly enriched (p=0.00009) for proteins identified in the pooled cerebrospinal fluid proteome from Chronic Fatigue Syndrome patients. We do not know what influence this enrichment has in CFS patients, but let us take a look upon Cdk5 research.

This study about Alzheimer's disease, Deregulated Cdk5 promotes oxidative stress and mitochondrial dysfunction, give us some interesting information, that might be relevant in ME/CFS research:

More information from Neurotoxicity induces cleavage of p35 to p25 by calpain:


This article, Oxidative Stress in Neurodegeneration, has a very fine figure explaining, when the neurons are stressed, there is an increase in Ca2+ leading to activation of calpain, a protease. Calpain cleaves p35 to p25 deregulating Cdk5 activity as p25 forms a hyperactive and more stable complex with Cdk5. Cdk5/p25 activity causes aberrant phosphorylation of various proteins leading to conformational changes inducing gain of toxic function. Misfolded proteins lead to self-aggregation thereby overwhelming the system by blocking transport and disrupting synaptic activity. This ultimately leads to degeneration of neurons and finally be the cause of various neurodegenerative diseases like AD, ALS, PD, and HD. 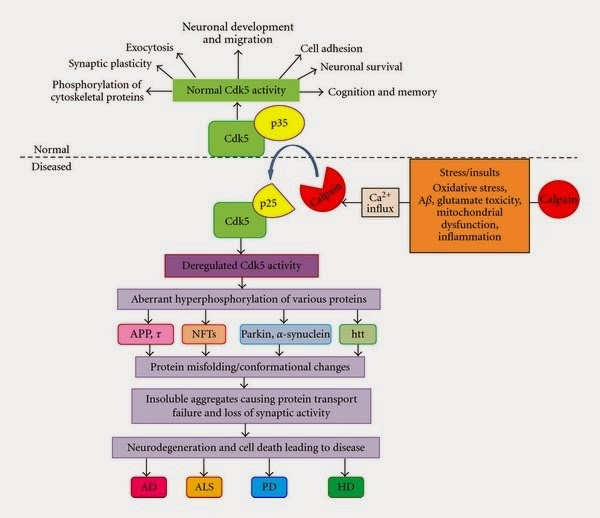 But ME/CFS is different from the neurodegenerative diseases mentioned here. Perhaps there is a shared biochemistry involving dysregulation of Cdk5 signaling pathway. The (p=0.00009) mentioned above must mean something. I have written a lot about TRPA1 and ME and comorbidities. If my guessing is on the right track, there could be a TRPA1 - Cdk5 connection. So I googled!

And look what a fine piece of work, I found: A dissertation (dec 2011) by Michael Sulak from Kent State University: MODULATION OF TRANSIENT RECEPTOR POTENTIAL CATION CHANNEL, SUBFAMILY A, MEMBER 1 (TRPA1) ACTIVITY BY CDK5

The goal of this work was exactly what I was looking for (the TRPA1 - Cd5k connection): “The overall goal of this investigation is to identify the role of cyclin-dependent kinase 5 (Cdk5) in the modulation of transient receptor potential cation channel, subfamily A, member 1 (TRPA1) activity in sensory neurons.”

Highlights from the results of Michael Sulak’s work:


And this study (jan 2014), ERK MAP Kinase Activation in Spinal Cord Regulates Phosphorylation of Cdk5 at Serine 159 and Contributes to Peripheral Inflammation Induced Pain/Hypersensitivity, concluded, that their findings suggested that p-Cdk5S159 regulated by ERK pathway activity may be a critical mechanism involved in the activation of Cdk5 in nociceptive spinal neurons. And this could contribute to peripheral inflammatory pain hypersensitivity.

Can this mechanism be involved in the pain in ME? Can the Cdk5 regulation of TRPA1 activity be involved in the chemical hypersensitivity in ME/MCS? In other symptoms? In any of my TRPA1 hypothesized connections to ME comorbidities?

Is the Cdk5 upregulation in ME responsible for other phosphorylations? What might Cdk5 further have on its conscience? To be continued…
Indsendt af Helle Nielsen kl. 05.41